How To Throw a Tea Party

Hey y'all! I hope everyone had a nice Mother's Day weekend. As usual my weekend came and went way too fast. If you're having a case of the "weekdays"(that is a thing, right?) this post is for you.   Because nothing makes you feel fancier than sipping Earl Grey from your favorite teacup.
My mom and I used to love hosting tea parties, especially during the summer. We would enjoy planning out every last detail for weeks. So if you wanna throw a tea party for a bridal shower, baby shower, or just to throw a tea party read on! 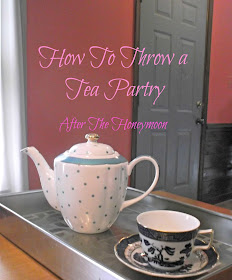 This is the first place to start(after you decide the date of your party of course), because this isn't one of those "build it and they will come" times, it's one of those "send a invitation far enough in advance and they should RSVP by the date indicated" times. Now if you want to go the traditional route(which I would advise) you can find cute invitations at Dollar Tree, Target, Walmart, or Hallmark. You should create a Facebook event in addition to your mailed invitations. That way you have a designated place for your guests to RSVP, because lets face it, people don't take the time to RSVP by phone anymore. But you can bet they've checked their Facebook page 3 times already today. Of course leave your phone number on the RSVP line of your invitations for the traditionalists.


Obviously you'll be serving tea, and a couple choices at that! But don't forget to include a few options other than tea for your guests. Water and punch should be enough. You could also include coffee if you like. As for the food you should provide a mix of sweet and savory. Mini cupcakes are great, petit fours are adorable, filo cups with hummus are a real crowd pleaser. When planning on how much food you're having keep in mind how long your party should be. You wouldn't have the same amount of food for a 2 hour party as a 4 hour party. The common rule of thumb is 6 to 8 pieces per hour per guest. 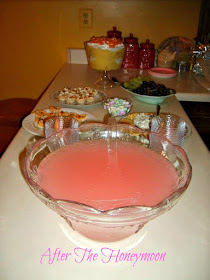 For decorations your teacups and teapots are a obvious choice. If you don't already possess an array of teacups a great place to look for inexpensive options is Goodwill and thrift shops of the like. You'd be surprised by the hidden gems you'll find. Hanging paper lanterns are a favorite of mine for parties. They make a good impact without impacting your budget too much. I've found them at Target before at a good price.

No party is complete without a soundtrack, not even a tea party. Classical music is a nice choice, music from the 40s is great, even some of today's mellower music can be perfect for the setting of an afternoon tea. Jack Johnson, Frank Sintara, Norah Jones, anything by Gershwin, and Michael Feinstein are just a few options for your playlist.

Now this section reminds me of a funny story from a tea party we threw when I was 12 years old. I had dressed up, gloves, pearls, hair up, heels on; I was ready for a tea party. I open the door to our first guests, it was my friends who were sisters and they had sundresses and sandals on. They were dressed very cute, but not as dressed up as I was. I don't think the Queen was dressed like I was that day. Before I can think better of it I exclaim "Boy am I overdressed!". My mother was mortified, luckily we had been friends for years so this was nothing new to them and their mom. Just a typical Robyn moment. So I tell you all that to say, don't expect any particular dress code to be followed by your guests, and try to dress in the middle ground. Not too causal, and not too overdressed.