I Used To Hate The Bachelor 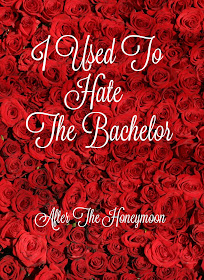 So I have a little confession for y'all today. I didn't always love The Bachelor, in fact I use to hate it. Yes you read that right . I found the whole show ridiculous. Why would any woman want to be a part of a show like that?  I would hear people talk about how much they loved it, or how he should have totally picked the other one and I'd be like "uh huh sure". I wouldn't have watched it if you paid me. I was so above it (insert eye-roll).
That all changed last January. It had aired the night before and I thought maybe I'll see if they have it On Demand, see what all the fuss is about. After all there has to be a reason women (and men, my brother is a fan, although he isn't watching this season because of Nick) tune in every Monday night. Two hours later I was hooked.
Maybe it was the anticipation of who Ben Higgins would pick, or what the bachelorettes would wear for the cocktail party, but if I'm being honest it was probably the drama. I mean who could forget Lace and her "I'm not crazy" choruses, or Olivia instead of offering her condolences to Ben when his friend died  just talked about her cankles. These women were either fantastic actors or just a little crazy (sorry, Lace).
As the weeks went on I had my favorites, Olivia (she's from Virginia!), Lauren B., Amanda, and JoJo. My pick for the final rose from the beginning was Olivia, even before she got the first impression rose. Then it was (finally) down to the final two, Lauren B. and JoJo, and shocker; he's in love with BOTH of them! I of course just knew he would pick JoJo, even his mom liked her. And he picked Lauren.
I was crushed. In that moment we were all JoJo. Unless of course you were rooting for Lauren  (my Mom picked her the first night!).  Then the JoJo fans rejoiced when she was announced as the new Bachelorette, and us Bachelor Nation newbies suddenly had a reason to watch. I was officially a Bachelor fan. How had that happened?
I'm now one of those girls that tunes in eagerly every Monday night, who asks other known Bachelor fans if they caught last week's episode. I even did a Bachelor fantasy draft this season. And you know what, I wish I had started watching sooner.
Full disclosure for this season: I'm totally Team Corinne, probably because Taylor is so overbearing and oftentimes rude I can't imagine she's a very successful mental health counselor. Maybe it's more like those that can't do teach thing? Assuming that saying is actually true. In the words of Corinne, Taylor "you do you, Imma do me". Preach.
While I side with Corinne on the Corinne vs. Taylor thing I think/hope Nick will pick Danielle M.
Are there any shows you used to hate that you now love? If you're a fellow Bachelor fan who are you rooting for this season?