Is This Your Only Child? 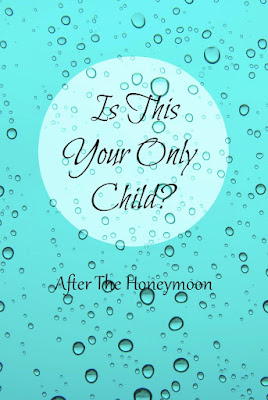 A harmless, simple question you could say. Polite conversation. Small talk. But to the grieving mother "is this your only child?" can bring up so many other questions and feelings.
I often find when I'm in a store or at the doctor's with Miller there's a sweet lady cooing at him. Honestly I'm always very grateful when people make over him. Since he's had everything so different I feel so blessed to have people not see him as different than any other baby. They only see his ocean blue eyes, and jolly cheeks.
They will usually ask how old he is. Then the next question will be, "is this your only child?". And the lump slowly forms in my throat.
They never mean it as anything intrusive, and it's the most normal question in the world. Why I often ask the same question of people if they mention their children. But I can't help but not know how to answer. Most of the time I reply "no he's my second child" and go on strolling with a smile. Pretending for just a moment that my son is alive and well, a 16 month old little boy who loves his baby brother and little toy cars. Because it's easier to let the well meaning stranger believe.
If the situation is a little more intimate, basically not in the frozen food section of Wal-Mart, I'll elaborate by saying "no my first son was stillborn". I know how uncomfortable it must make people feel. No one knows what to say. I don't even know what to say.
Plenty of bereaved mothers are asked this question frequently and I wonder how they answer. Does there ever come a point in time where they simply answer "yes" with the explanation omitted from the conversation. Do I want that point to ever come? A day when James is no longer current events. For some it's too painful to be reminded of their child, and I understand that, I do. But for me it's too painful to not mention him. To deny that he was my son, and I was his mother. To behave as though I'm just a mom of 1, and not 2. At least that's how I feel now.
I sometimes feel as though I don't know where I belong in the whole mom category so to speak. It can be difficult to identify when you're a mom of 2 but yet being a mom is all new to you as well. Even getting Miller's birth certificate was something new for me, as James never had one, something that never made sense to me. As if it isn't painful enough already, even the government only recognizes me as a mother of 1.
Last year was my first Mother's day, which felt horribly ironic given I was a grieving mother desperately hoping everything would be okay with my soon to be born child. It didn't resemble anything Hallmark had done a commercial on. How strange to be a mother before you've even felt the joys of motherhood. Well this Mother's day when someone asks "is this your only child?" I shall reply with "no, my first son was stillborn, but both of my sons are in my heart".  This Mother's day please remember the mothers whose children may only be in their hearts.


Linking up with Natalie and Annie